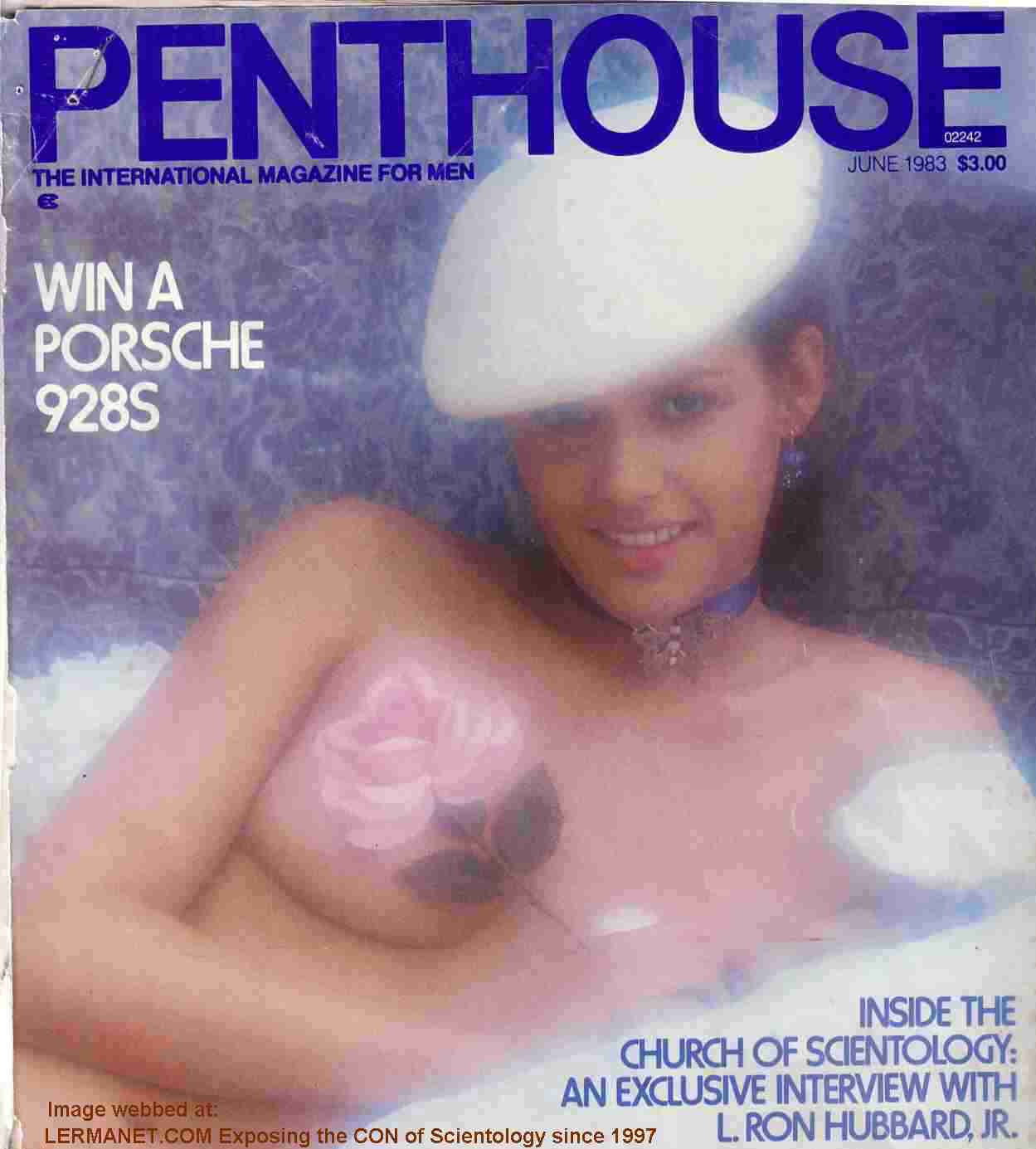 Sillyone at Teetering on the Brink of Normalcy posted (here) about parenting in the age of internet pornography - and specifically, what to do about a 15-year-old son.

Those Penthouse magazines were more valuable than gold. And as dangerous and unstable as uranium. Once you had one, did you risk bringing it in the house to stash in your bedroom (high risk, high reward) - or did you try to find a super-secret spot to hide it in the woods (no risk of parents, but the risk that it would be found...or rained on and ruined...plus you couldn't be, *ahem*, alone with it.)

Anyway, this is more reminiscing about a time I wouldn't go back to for all the money in the world than giving any thoughtful advice to the parent of a current 15-year-old. Looking at the feedback to the original post, there's a link to a Dan Savage post that seems like a really good answer. 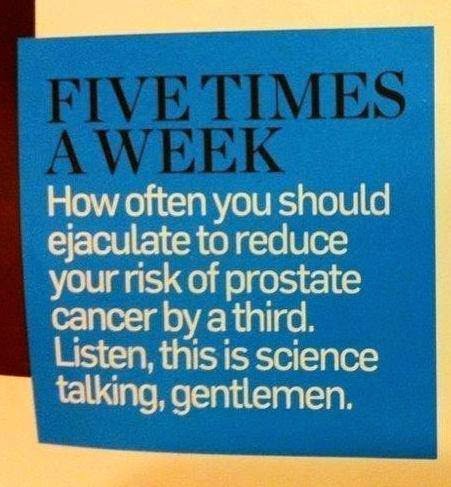 I just saw this on my Facebook feed. The journal reference is here.


Men who averaged five or more ejaculations weekly in their 20s had an odds ratio (95% confidence interval) of 0.66 (0.49–0.87) compared with those who ejaculated less often.

Ejaculatory frequency, especially in early adult life, is negatively associated with the risk of prostate cancer....

If this is true, then the odds are definitely in my favor. In my 20's, I'm pretty sure I was averaging seven times or more per week. I'm not in my 20's any more - but I think I'd better keep up the five times per week, just to be safe.

I love it when science recommends that I do what I'm already doing. :-)
Posted by Max at 2:37 PM 3 comments:

An Evening on Campus

As chance would have it, I'm wandering the campus of my old alma mater, VPU, on a gorgeous Sunday evening (acronyms, if you care, are defined here). It seems like the best option for the evening. I've delivered Younger Daughter and giggly friends to a concert in the city, and it doesn't make sense to go home and then turn around and come back to pick them up. So I've brought my laptop and can walk around, or set up in a coffee shop or public bench and observe, reminisce, and daydream. Random thoughts to follow:

7:12pm: Walking the campus with a backpack on my back, I feel like I'm still a student here...transported back in time. My reverie is broken when I see my reflection in a glass wall. I've lost some hair and gained a beard that's as much gray as brown in the intervening...how many years? Calculating.... Holy smokes, really?!? Well, it's less than 30 years...yes, definitely less than 30. I'll take comfort in that fact, since 30 years would be a very long time. :-) All too soon, I'll have to redefine what constitutes a very long time...but that's a worry for another day. 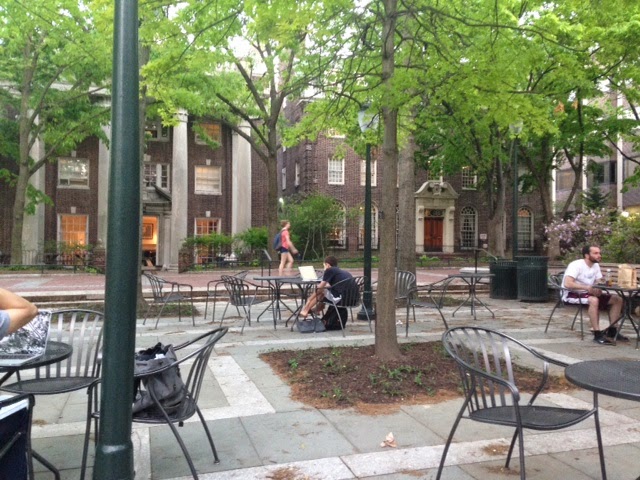 7:32pm: I've found a table in a sparsely-populated courtyard, and can daydream and write in peace. My time travel has taken me back to a place that's not the happiest - I didn't have one date here, or kiss one girl, in four long years here. How is that possible for a desperately horny young man?!? But I really didn't, and I wasn't the only one - none of my core group of friends fared any better. This is a *serious* place. I had some adventures at home in the summer, and dated a girl from SCGC for most of my senior year. But my next romantic or sexual adventure on this campus will be my first.

Two of my equally sexless good friends were very short, and came up with a theory they quite liked - that women only wanted tall guys. In joke-filled late night conversations, they would fantasize about what a swath they'd cut through the campus women if only they were taller. As I was taller than average, they would mockingly shake their heads and call me "a waste of height."

I think about my friends who went to ESU, and I just shake my head. From the tales they told, they may as well have been on another planet, not just at a different school. But when I think about what would have happened if I'd gone there, the most likely scenario is that I wouldn't have gotten laid when everyone around me was, which is much much worse - far better to not get laid when none of my friends were either. Best not to pursue this line of thinking.

8:03pm: Coming back to the present, I can't help admiring the coeds passing by - leggy young things in short shorts and t-shirts or tank tops. I can't help feeling a little like a voyeur or a dirty old man - but I simply can't help myself. I can't imagine that I'll ever lose my appreciation for the magic of the female form. The Sensual Goddess is fond of saying, in situations like this, "She's young enough to be your daughter." While that may be true, my response is always the same. "But that one's *not* my daughter." I'm just looking, and am completely harmless.

8:24pm: I love sitting anonymously in a public place and people-watching. I really am a voyeur, in every sense of the word. I enjoy watching and observing.

Question: when you're sitting and watching people walk past, do you ever play a game with yourself where you give yourself 10 seconds to decide on which passerby you'd most like to fuck? Ummm...no, I don't either. ;-) But if I did, it could be an amusing game. A sample from this evening might go like this.

A busty brunette in gym shorts and a tank top who walked by two seconds later might have been a better choice...but you have to make quick decisions, and you can't second-guess yourself. In the purely theoretical event you ever play this game....

9:01pm: I just thought of a girl I hadn't thought about in a very long time. Possibly the most beautiful girl I've ever known (no offense to anyone currently sharing my bed and last name. :-)) She was half-Japanese and simply *gorgeous*. Exotic, fashion-model beautiful, tall, slim, leggy, busty. Possibly the last boyhood crush I ever had. Thinking about her made my heart *ache*. And I couldn't think about anything except her. We got to be friends - but in today's terminology, I was very much friend-zoned. We went to the movies together, and I'd phone her late at night and we'd talk talk talk. But I was so shy in those days that if she'd wanted to be more than friends, she would have had to take the first, second, and third steps. And she never gave any indication that she wanted to be more than friends. So it didn't happen. Very sweet...very innocent...very bittersweet.

9:19pm: I've relocated to a campus Starbucks. While walking over here, I saw two young ladies walking toward me, young but not undergrads (i.e., not *too* young), both pretty and sexy in an understated classy way. One with short blonde hair...shorter...bustier...in a short white dress. The taller one, longer brunette hair, short blue dress. My internal conversation went something like this:

Which one? Well, duh - how about both!

No, that's a fantasy for another time. You have to pick *one*. Which one? Quickly now.

Hmmm...there isn't really a wrong choice is there?

Then I asked myself why? It wasn't because she's blonde - I don't have a preference for hair color (though I tend to gravitate to brunettes.) Bigger tits? No. Of course I appreciate a nice rack, but that wasn't the deciding factor. Watching them walk, the blonde just seemed more comfortable in her body...it seemed like there was a slight swish in her walk that held the promise of delightful mischief. Of course it could all have been in my head....

9:46pm: Time to wrap up my campus daydreaming and go pick up my concert-going girls. This was fun. Until next time.
Posted by Max at 9:49 PM 4 comments:

Is there anything more boring or self-indulgent than the blogger writing about why he isn't blogging? No, not many things. But since I've already started down that path, here's the condensed version, before you click over to a blog with something interesting to say: I'm fine, and hope to be writing more soon.

For anyone still reading, first of all, thank you for keeping me on your reading list. I'm alive and well. Life is generally good. I'm as beastly as ever (as reported by those in a position to know), and I have fantasies, observations, and real-life adventures to share.

So if that's true, then why aren't I writing? I'm not sure the answer to that. When I look back at when I wrote 10, 12, or 15 posts per month, I don't know how I did that. That took a lot of energy - but it wasn't a struggle, it was what I really wanted to do. I can't seem to muster that energy now. 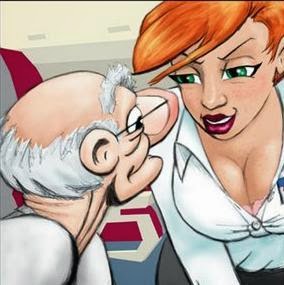 One thing I can say for certain - this blog isn't going anywhere. I like what I've written, and I like being able to look back over it. And I hardly ever look at blog stats like I used to, but when I do, I'm pleased (and kinda amazed) to see that people still read my stories. I guess if I ever run for the U.S. Senate, I'll have to take the blog down for safety's sake - but barring that *extremely* unlikely occurrence, I'm not going anywhere.

I know that blogs (and especially sex blogs) age in dog years. My four-year blogoversary was in April, which I think means that a pretty young nurse will wheel me into the seniors section of Blogger (strained carrots for dinner, long rambling stories of the good old days and how it used to be on Blogger - just be sure to get me back to my room in time for Wheel of Fortune!)

Anyway, enough rambling. I'm alive, I'm well, and I hope to write more...though I have no promises or predictions of that actually happening.
Posted by Max at 12:14 PM 7 comments: