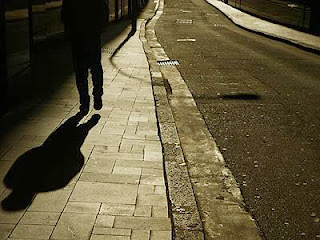 I'm on my way home the other night, and I had to stop and get a few things at the grocery store. I got to the store entrance at the same time as a woman, who was probably a bit older than me, nondescript looking, so I paused and nodded to her to go first.

I start my shopping, pick up a few things, then go to get some yogurts. I get there, and the woman I entered the store with is getting yogurts - and her cart is right in front of the ones I'm looking for, so I stand there and wait. She puts her things in her cart, realizes that she's been blocking my way, and moves her cart. I nod at her with a half smile - *not* flirting, just trying to convey, "No problem, thanks for moving your cart." But her reaction looks like one of alarm, and I'm a little shaken as I get my yogurt.

I'm thinking, "What the hell just happened?!?" That's the kind of interaction you have with people all the time in the grocery store. Anyone who knows me knows that I don't talk to random people in public. I often feel literally invisible in public places, and I kinda like that. But she was definitely alarmed by me. Does she think I'm following her around the store? I'm quite certain I didn't do anything creepy/stalkerish. I bumped into her twice, and simply tried to be courteous both times.

Well, there's nothing to do at this point but continue my shopping and hope I don't see her again. I get a few more things, then my final stop is ice cream. I round the corner into the frozen aisle...and wouldn't you know it, there she is getting ice cream. She looks up, sees me, and her look is now undisguised fear. She hurries off, as I wonder what kind of bizarro world I've gotten caught in.

I was done my shopping, and was wary of the checkout lines. I'm pretty sure she would have maced or pepper sprayed me if I'd gotten behind her at checkout. But thankfully I didn't see her again, and got the hell out of there as quickly as I could.