I'm pleased and flattered that Brigit Delaney at The Lustful Literate has listed me for a Very Inspiring Blogger Award, with the comment:


Another one of my favorite "man" sex blogs. Always a joy to read his Flash Fiction Friday entries.

Rules:
1. Display the award logo on your blog.
2. Link back to the person who nominated you.

3. State 7 things about yourself.

4. Nominate 15 other bloggers for this award and link to them.
5. Notify those bloggers of the nomination and the award's requirements. 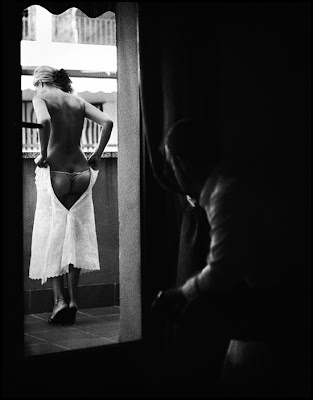 She was at the point of tears. "It'll be impossible."

"No it won't, we'll still find time to be together." Did I believe that myself?

"How can you say that? It's hardly possible now - it's all we can do to squeeze in the occasional stolen moment. I'm already terrified of being discovered. It will be a hundred times scarier now."

"You just have to believe that we'll find a way." Was I trying to convince her, or me?

I took her in my arms and kissed her. Was she feeling regret? Was I?

She broke the kiss and went out onto the balcony, basking in the sun, then she turned toward me. "We could go away together...a private little island where it'll just be the two of us. Tell them you can't take the job."

"Tell them I can't take the job? Sister Mary Margaret, I've been elected pope. Please get dressed. Come in here and let's make the most of these few moments before I address the crowd in St. Peter's Square."

The challenge this week was: any prime number of words.
The word "regret" must be used.
Go see Advizor to see who else is participating.

The March edition of Kat's blog chain is now posted. This month's topic is "March madness: sex with an athlete." Please read the various submissions - you'll be glad you did. My entry is my recent post, The Charity Ride.

If you haven't joined in yet, why not join next month's edition? The subject will be "Spring Break." Kat's instructions are as follows:

Full blog chain details are here. Many thanks to Kat and Ryan Beaumont for organizing this.
Posted by Max at 10:41 AM No comments:

She glanced at my room key, smiled, and noted that her boyfriend wouldn't be done his ride for a while. I smiled back and (not for the first time that day) wondered what her body would feel like against mine. But I was far from certain that she was hinting at anything, so I just suggested that maybe we could hang out after we showered and changed. She agreed and said she'd come get me in a bit.

I got to my tiny room, tossed my bag in the corner, and was very pleased to see that I had a private bathroom and shower. Many rooms didn't, and shared a common bathroom/shower. My body was weary after the long ride, and I peeled my sweaty clothes off and laid on the bed, needing a few minutes of horizontal rest before the ecstasy of a long hot shower.

My reverie was broken by a knock on the door. I jumped up and wrapped a towel around my waist. It was her. I apologized for my state, and she smiled. She wondered if I had a private bath - she didn't, and there was a line of cyclists down at the end of the hall waiting to shower. I said "of course", and invited her in - noting that she had a towel and her toiletry bag with her.

She put her things down on the bed and turned to me and our eyes met - and there was no question. We reached for each other and kissed hungrily. My towel fell to the floor, and I peeled the sweaty spandex off her. The kiss went on, and our hands explored...stroking, probing. She whispered in my ear that she didn't have much time. I took her arm and led her to the shower.

It was tiny, but somehow we both fit. The hot water felt exquisite on my sore muscles, and her warm naked body felt even better than I'd imagined. I pressed her against the shower wall as the water beat down on us. I soaped her body and squeezed her breasts. She reached for my cock, which was hard as steel, and guided me to her. I covered her mouth with mine and thrust, and she moaned into my mouth as I entered her...pinning her against the shower wall. She wrapped both arms and one leg around me and I fucked her hard. She came with a shudder and a low deep moan, and then I was coming...so hard I swear I saw stars.

We came slowly down together, then de-coupled. We finished a quick shower, then stroked and kissed a little more. I wanted more..so much more. I badly wanted to lay her down and make sweet love to her - but I knew it wasn't happening. She looked at the clock and said she had to go, so I gave her a tight hug and one last kiss and she was gone.

Postscript: I didn't see her on the ride back the next day. I wondered how she would react the next time I saw her at volleyball - but she gave no indication that anything was different. That stung a little at first, but I knew it was probably for the best. I have my memories, and they're very sweet.
Posted by Max at 11:09 PM 3 comments:

The topic for this month's blog chain is "March Madness - Sex with an Athlete." I have a story that might qualify. Scratch that, I've decided it qualifies.

More than a few years ago, my physical outlet was road bicycling. Yes, I was one of those guys in the spandex bike shorts early in the morning - on a quiet country road if that was possible, or on a less-quiet suburban road if that's how it had to be. (Before you ask, if there were any photos of me in spandex, they've long-since been hunted down and destroyed.) I enjoyed so many things about it: the flow of the blood in my veins, the scenery passing by, the road rushing under my wheels, and the meditative state I'd settle into on a long ride.

For a number of years in a row, I trained all summer to do a weekend charity ride in September - a long ride to the beach on Saturday, then riding back on Sunday. It was very well-organized, a lot of fun, and raised money for a good cause.

One year, on the Saturday ride to the shore, I was stopped for a snack in a big field that the organization had turned into a lunch/rest stop. I was re-fueling with a banana and Gatorade when a voice called my name, and I was greeted by a girl I knew a little from a volleyball league I sometimes played in. She was pretty - fairly tall and shapely, with green eyes and dirty blonde hair pulled back in a ponytail. I was surprised she was talking to me - at volleyball, she kept close to a guy who I assumed was her boyfriend - and he seemed like an unpleasant controlling guy who didn't like her talking to any other guys.

We chatted pleasantly, and it was nice to just talk to her without her creepy boyfriend getting upset. I asked where he was, and she laughed that he was lagging behind, and finally told her to go on - that they'd meet at the end. I was done my snack and ready to ride again, and she asked if she could ride with me. I was very pleased to have such delightful companionship, and off we went. We rode together for many miles on country roads through farm fields, surrounded by other cyclists. We chatted happily all the way to the shore.

One thing about a cyclist's spandex garb is that it doesn't leave too much to the imagination. We rode side by side, legs pumping, and I couldn't help but notice the muscles in her thighs and butt working fluidly. It was a hot sunny September day, and she had undone the zipper of her shirt for ventilation, allowing me a tantalizing view of cleavage as she leaned forward on the bike. But I was simply admiring her physique, which was impossible not to do. I thought of it as pleasant conversation with a new-found (and attractive) friend.

We got to the shore, crossed the "finish line", and retrieved our bags (that had been transported there.) We discovered that we were staying in the same old hotel - basically a big old-fashioned roominghouse from the 1920's. That wasn't as big a coincidence as it might sound - the place had a ton of rooms, they were cheap, and they advertised to the cycling community - so it seemed like just about everyone on the ride was staying there.

We checked in, one after the other, and as we got ready to go to our respective rooms, I got my first hint that maybe something more might happen. 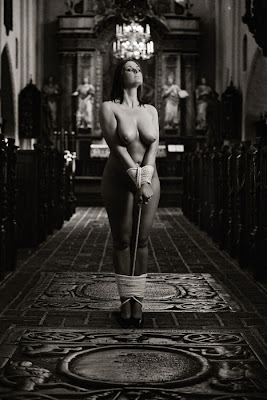 All my years of training had come down to this moment. The elders had gathered in conclave, then sent word that I had been selected.

I waited in the sacristy, alone, until I heard the bell ring. I bowed to the Goddess and entered the temple. The high priestess awaited, the representative of the Goddess, naked except for the ropes that bound her.

I gathered her in my arms and carried her to the altar, then laid her down on it. By design, her head hung off the edge. I doffed my robes and slid my erect cock into her mouth. I clasped my hands behind my back and thrust, fucking her throat without mercy until I unloaded into her.

I took the dagger from the altar and sliced the ropes binding her, symbolizing the end of male dominance. I pleasured her orally until I was hard again. Then I laid on the altar and she took me. When I climaxed, hours later, I felt a wave of divine energy.

The ordination ceremony was complete. I was now a consecrated priest in the service of the Goddess. From now on, I could only climax with the consent of a priestess.

The challenge this week was: up to 200 words.
The word "conclave" must be used.
Extra credit: correctly guess the name of the new pope. :-p
Go see Advizor to see who else is participating.