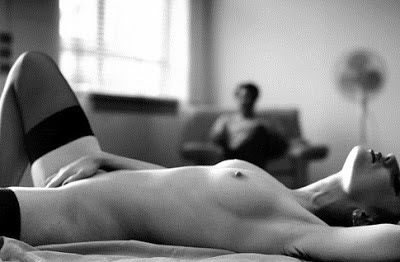 "This is what you were wearing earlier? Just these stockings?"

She watched me move in close, felt my hot breath on her sex. I touched my tongue to her pussy and gave her one long slow lick.

"Go on." I circled her clit with my tongue.

"I laid on the bed and asked him to join me. He frowned and sat down in the chair instead."

I spread her pussy lips with my fingers and pushed my tongue into her. "Then what?"

I slid my tongue up and down, back and forth...tasting her sweetness...her soft moans in my ears. "And he didn't react at all?"

"Not at all.... My god, how can you expect me to talk when you're doing this.... No, he acted like it was punishment. He just sat there, then finally said 'Why are you doing this? You know we'll make love tomorrow.'"

I wrapped my lips around her clit and sucked, and she let out a deep needy moan. It still boggled me that my idiot boss would only touch his wife once a year - on Valentine's Day. Well, his loss was my gain for the other 364 days.

I pushed one finger, then a second, into her pussy and moved them slowly in and out as I flicked my tongue over her clit. Her whole body tensed, and she climaxed with a scream.

"Now get up here and fuck me."

The challenge this week was: up to 300 words.
The words "love" and "punishment" must be used.
Extra credit to set the story on Feb. 13.
Go see Advizor to see who else is participating. 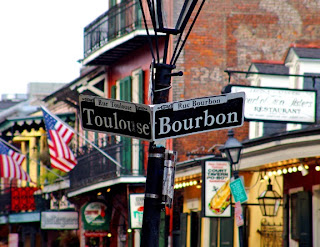 I see that today is Mardi Gras in New Orleans. I've been to New Orleans a few times many years ago (though never at Mardi Gras), and it really is a place like no other. I have some good memories and good stories, and I'll tell one now.

I would have been in my early 20's, and I was on vacation with a few buddies. We had made a few stops, and we had two days in New Orleans before flying home. We were young and naive and hadn't seen too much of the world, and the "anything goes" attitude was eye-opening. Decadence not only permitted, but encouraged? Yeah baby!

So it was our last night there, and we were determined to maximize our New Orleans experience, disregarding the fact that we had a flight home in the morning (oh to be young and invincible again.) We had eaten like kings, seen fantastic live music, and were hopping from one bar to the next, drinking heavily and whooping it up.

Our last stop, with dawn approaching, was a tiny little dive bar far off Bourbon St. We got another round of drinks, and one of my more-outgoing buddies chatted up the people there. Some time later, he introduced me to a curvy young Southern belle. I can't remember her name...let's call her Scarlett. It was Scarlett's 18th or 19th birthday (whatever the drinking age at the time was for the state of Louisiana), and some of her friends and family had taken her out to celebrate.

I had had enough drinks by that point to overcome my natural shyness, and I chatted up Scarlett like a pro. Next thing I knew, we were making out right there at the bar. The thought was going through my alcohol-addled brain that this felt pretty damned good, when I felt a hand on my shoulder, and we were yanked apart. If this had been a TV show, there would have been the sound of a record needle being dragged across a record.

An old battle-axe was wagging a finger in my face (yes, literally wagging her finger!) and lecturing me angrily. Something about what were my plans for the young belle.... Even in my advanced state of inebriation, I knew that "fucking her until she screamed" wasn't a plan she wanted to hear. But I couldn't think of any answer that would satisfy, so I just gaped like a fish out of water and accepted the lecture.

After she walked away, Scarlett apologized and said it was an over-protective family friend. We talked some more, and even made out a little more - but then her group was leaving, and that was that. Me and my buddies stumbled back to our hotel room for an hour or two of sleep, and then suffered through a badly-hung-over flight home.

A week later, back at home, I got a frilly letter in the mail with a Louisiana postmark (yeah, I'm seriously dating myself, huh? Not a text msg, an e-mail, or a FB friend request - a letter in the U.S. mail!) I didn't even remember exchanging addresses, but there it was. She sent me a very sweet note about how nice it was to meet me, how handsome I was, and how much she loved my blond hair. Cue the sound of another dragged record needle. I've been called many things before, but never blond.

Ah well. I didn't answer the letter. I figured it was better to leave her with the imagined memory of a handsome blond man than to ruin it with cold-light-of-day facts.
Posted by Max at 5:41 PM 3 comments: 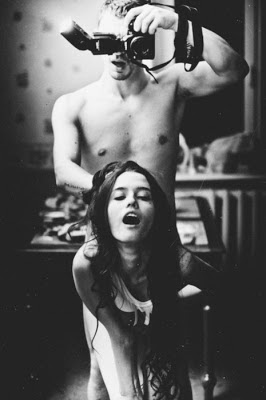 Yes, it was definitely our son. And the neighbor girl.

I asked her where she found these pics, and she told me she found a memory card while cleaning, and popped it into her laptop to figure out whose it was. Now she knows.

I tried not to laugh out loud. 20 years old, and she still thinks of him as baby. If he's getting a piece of her, good for him.

"You need to have a talk with him."

Yes, I thought to myself, I definitely need to have a talk with him - a talk about being more careful where you keep your intimate pics. And that made me think - I should double-check that the pics I'd taken while fucking the little vixen were safe and secure.

The challenge this week was: up to 310 (non-scientific estimate) words.
The phrase "...charged..." must be used.
Go see Advizor to see who else is participating.

The satirical news site The Onion is a website I check out just about every day. Their take on the news usually gives me a good laugh. This one made me laugh - but it also hit a little too close to home:

Calling the transformation both delightful and stunning, friends and family members confirmed Tuesday that 17-year-old Ashley Parker was blossoming into an absolutely gorgeous object.

According to Parker's relatives, in the span of 14 months, the high school junior underwent a staggering metamorphosis from a young girl with thoughts, feelings, and aspirations into a truly stunning commodity.

"Ashley has really developed into quite a striking assemblage of physical attributes that are found to be sexually attractive in our culture," said Parker's uncle Keith Hayes, expressing astonishment at how his niece had steadily matured from a precocious youth into a shapely, ravishing thing devoid of intellect and personality. "It's hard to believe that she used to be that little girl [capable of subjective experiences] that I remember. Now look at her—she's such a lovely vessel for displaced sexual frustration and voyeuristic lust, just like her mother."

It continues here. Very funny (unless you have teenage daughters), and all too true.
Posted by Max at 11:08 AM 1 comment: 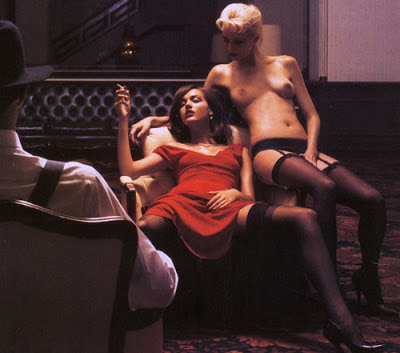 She took a lazy drag on her cigarette. "So, inspector...to what do I owe the pleasure of your visit?"

I smiled thinly at the insincere pleasantries, while cursing internally at the captain who made me follow up on this complaint. I reserved a few more curses for the big-shot businessman who'd lost his expensive watch and the contents of his wallet while...occupied...at this establishment.

I explained the nature of the complaint, and she smirked. "I'm sorry, inspector, my memory is hazy. I'm afraid I don't know anything about that."

We both knew there was nothing I could do. She had high-level political connections, and she knew I wouldn't dare bust her. So the little vixen taunted me. She slouched in the chair and her legs moved slightly apart. "I guess you'll have to search me, won't you, inspector?"

I didn't answer that. This line of questioning was as fruitless as I expected it to be. "Perhaps I could ask a few questions of the young lady who was with the alleged victim at the time of the incident?"

She called, and a blonde goddess walked into the room and sat on the arm of her chair. "Inga, the inspector here thinks we relieved a gentleman of his valuables one night last week." She slouched further down into the chair and spread her legs wide, her red dress riding high on her thighs.

Inga looked at me, but said nothing.

"I assured the inspector that we don't know anything about that. But he's a suspicious man, and he's not going to take our word for it. We're going to have to...satisfy him...that we're not hiding anything." Inga smiled seductively.

The next morning I could honestly tell the captain that I had searched everywhere and found no trace of the missing valuables.

The challenge this week was: up to 300 words.
The phrase "...hazy..." must be used.
Go see Advizor to see who else is participating.