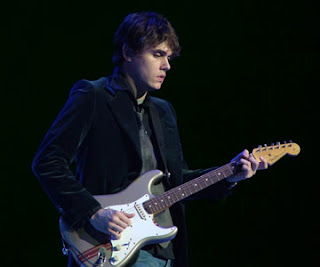 I sometimes look over the Sensual Goddess's shoulder as she surfs the celebrity gossip websites. Sometimes we'll laugh about the ridiculousness of someone's behavior - or she'll draw my attention to some busty young starlet whose name I don't know and won't remember.

One thing I noticed is that John Mayer is inevitably referred to as a douchebag. Now I like John Mayer as a guitarist, so I was curious why the gossip pages are so hard on him. With a little Googling, I learned that it's because he's the King of TMI. (Maybe this is common knowledge to most of the world, but it was news to this mostly non-follower of pop culture.)

Holy smokes, I have never seen anyone so self-destructingly honest. Here are some highlights to an interview he gave to Playboy Magazine. He answers their questions honestly and at length, seemingly with no regard to how how those answers are going to make him look. I find it both refreshing (he's actually giving insight into what makes him tick, instead of just spouting the usual publicist-approved non-answers) and appalling (there are some opinions you should just keep to yourself.)

I just find it interesting - I'm not his fan or defender. But I'm not inclined to join the "what a douchebag" crowd. From what I've read, the guy has issues and doesn't seem very happy, despite his success. So I'll think of him with compassion instead of scorn. I guess I've also stopped expecting sports or music stars to be role models - I just appreciate their athletic or musical talent, and try not to look at them as model human beings.

Anyway, all I really care about is that the guy really can play the guitar. His John Mayer Trio, with Pino Palladino on bass and Steve Jordan on drums, is three amazing musicians making great music. Here's "Who Did You Think I Was" and "Good Love is on the Way".