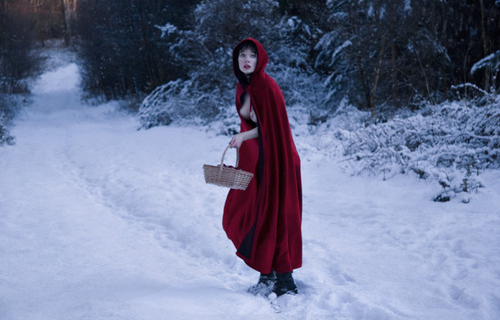 "Come inside, girl. You'll catch your death of cold."

"My name is Grimm. I live here with my brother. Sit by the fire. I'm glad I came along when I did, those two big scary men were about to catch you."

She smiled an innocent smile. "I wanted them to catch me. We were playing a game. But you scared them off."

"Yes, I met them at grandma's house. They showed me some fun games they were playing with grandma. One was the woodcutter, and one was Mr. Wolf."

"Oh yes. When I got there, they were all on the bed naked. Grandma was making such a noise that I thought they were killing her. I screamed. But grandma laughed and said it was time I learned some things."

"But it was so exciting. He said he was going to eat me up. And he did! Then grandma said to run outside and let them chase me. That's when you came along. They were going to take me at the same time."

I said I wasn't going to, but what the heck, it's not that much trouble to collect links. If I see a post, or if you let me know you've posted, I'll add it here.