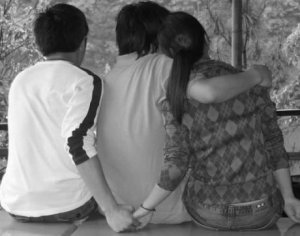 Here's a true story that I had basically forgotten about until it recently popped back into my head. It happened in the post-college years, which for me and my close group of friends, was marked by the lack of female companionship. We were all in the same boat - geeky and awkward around girls. There were occasional dates, but nothing serious, and no one was getting laid.

That unexpectedly changed for the most unlikely one of us - Tom, the most uptight of us, and the one who seemed to actively not want any girls crashing our all-guy group. At the time, he was living about an hour away from the rest of us, so we heard rumors of the new girlfriend, and that the president of the "he-man woman hater's club" was actually getting laid. The mind boggled. But I was happy for him.

The next time we all got together, he brought Susan, the new girlfriend with him. She was pretty, charming, smart, witty, and down-to-earth. And friendly. Way too friendly for Tom's liking. She had a charisma, and made you feel special when you were talking to her. And she made a point of touching you when she talked to you - not exactly flirting...or maybe it was. But let's just say that it was highly entrancing.

At one point while talking to me (and with the whole gang around), she put her arm around me and snuggled in - and goddamn if that didn't feel good. There felt like an electric crackle between us, and she was giving me a look that she felt something too. Suffice it to say I was *very* conflicted between the desire to get this girl alone somehow, and the knowledge that this was my close friend's girlfriend - and I couldn't do that to him. No, I simply couldn't...could I?

The evening ended without further incident, and I was intrigued, but the more I thought about it, the more I decided that I definitely couldn't betray my friend. I also heard later that he was pissed off at her behavior that night.

A month or so later, I was hanging out with Tom, and Susan came over. We all had dinner and some drinks, and talked long into the evening. She mentioned that she was going to be attending a training class, and was going to be staying near me one night the following week, and did I want to get together for dinner or a drink?

I looked at Tom, who told me to go ahead, that I should show her around and have dinner or whatever. So I gave her my phone number and told her to call if she wanted to get together.