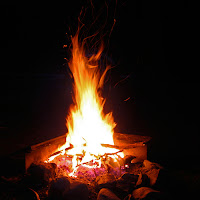 It was late at night at the secluded campsite. I was sitting with three friends around a roaring campfire and doing our guy thing - drinking beer, telling stories, laughing at old jokes. It was a warm summer night, and I held back a little from the conversation to look up at the full moon through the trees.

I felt you before I saw you, and then I watched you move from the darkness of the woods into the fringe of the campfire's glow. Our eyes met...my buddies as yet unaware of your presence. Our locked gaze told me all I needed to know, and I summoned you to me with a nod of my head. You came to me as if pulled by a string, your look a mix of desire and helplessness.

I stood up and cleared a blanket of its contents with a sweep of my arm. The motion and noise startled my buddies, and the look of shock and disbelief on their faces was priceless. The violent tearing of a few pieces of fabric, and you were naked in front of us, licked by the light of the fire, quivering but unashamed. I guided you to the blanket and laid you down.

I lifted your knees and spread them, exposing you to us completely. The look in my eyes was pure beast - a wolf regarding a sheep. I moved on you and entered you in one animalistic thrust. Your cry was the sound of prey being taken. I pinned you underneath me and took you roughly, without mercy, and without words. Our eyes were locked, and you knew better than to look away.

My buddies were watching me take you, eyes wide with wonder...and desire. You were aware of their presence, and were probably wondering if I would let them have their turns with you when I was finished. I grinned an evil grin to myself at the thought - but that was a decision I would make later.

For now, you're mine alone. Mine to fuck, mine to use, mine to devour. Later, maybe mine to share. By the blazing light of the campfire.
Posted by Max at 2:13 AM