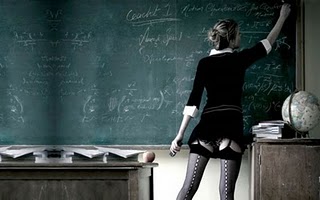 I read a great post from Snake at "Life is Beautiful" that rants against the silliness of the belief that being gay or straight is a decision that one makes. I completely agree, and it also brings up some memories of mine from a very young age.

The first sexual thoughts I can remember (although I only classify them as "sexual" in hindsight) were in first grade. There were two first grade classes in my school, and the classrooms were right next to each other. My teacher was the best first grade teacher I can imagine - an older-middle-aged matronly woman who was warm, sweet, and loving, in addition to being a good teacher. Having her was a blessing and a wonderful way to be introduced to the whole process of school.

But I digress - the teacher of the other first grade class was a young, slim, curvy thing who dressed in mini-skirts and tight sweaters. I had no words to describe what I felt, I just knew, at six years old, that I liked looking at her a lot! Her long legs, the curving flare of her hips, and the shape of her breasts under that sweater were just mesmerizing. I got a thrill every single time she came into our class to talk to my teacher. I couldn't have explained why I liked to look at her, I just knew that nothing could have kept my eyes off her.

And I have another distant memory, also from first grade. I've always loved cats, and have lived with cats basically all my life (only excepting four years at college.) A few of the girls in my class also liked cats, and somehow we began playing "cats" at recess. They were the cats, and I was the cat owner. They got on all fours and meowed and purred, and I petted their hair and told them they were good kitties. I *loved* playing cats, and again, got a secret thrill that I couldn't have described. Just an inner rush - a feeling that here was something new and exciting and *really* good.

Anyone who knows me now might say that nothing has changed in all those years (hopefully without rolling their eyes....) Yes, I'm still mesmerized by a woman's curves, and yes, I still love stroking a woman and running my fingers through her hair. (We'll leave my desire to be surrounded by subservient women on their hands and knees uncommented on, thank you very much.)

But my point is that these feelings weren't a decision on my part - this was hard-wired. The sight of a busty young thing in a short skirt and tight sweater thrilled me the first time I saw it, in a "Hell yeah, that's what I want!" way, even at six years old, when I hadn't the slightest idea where that desire ultimately led. I can't imagine that being gay is different. I have to think that while they're responding to different stimuli, it's the same pre-rational "Hell yeah!" There's no decision involved.