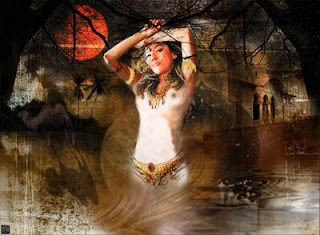 Over the next week these scenes repeated with infinite variations. Long baths, feasting, storytelling, music, dance, and endless lovemaking. Sometimes we were alone in my bedchamber, exploring each others' bodies for hours without end. Other times we made love in the baths, the sounds of the splashing water mixing with your soft moans.

You showed me sensual delights that I couldn't have imagined, and coaxed a level of passion, desire, and stamina from me that I could only regard with delighted surprise. It always seemed to me that you were in total control, and even when I was taking you roughly, it seemed to be at your direction.

Occasionally you brought two or three young attendants into my bedchamber. They were your apprentices - young girls from the Ferghana Valley, almost Persian in appearance. You recited a story, and we acted the story out in front of you, coupling in every possible way at your direction. But even when my manhood was buried in one of your moaning assistants, my focus was on you, and the connection between us was as intense as could be. The story always ended with you joining us on the cushions, telling the end of the tale as you guided me to one final release.

We knew our time was limited. As soon as everything was in order, the next caravan would depart eastward for Kashgar, and I would be going with it. When we parted, it was with joy and gratitude, never with sadness or regret. We both knew that we were sharing a road, and would meet again.
Posted by Max at 12:03 AM