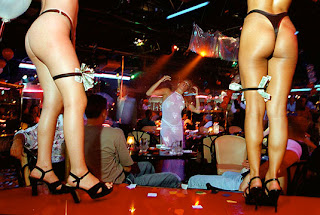 A few years ago, during a visit to the Sensual Goddess's home and native land, we drove past a series of adult entertainment establishments (i.e., strip clubs) not far from the in-laws where we were staying. She laughed and said she'd always wondered what went on inside. I told her some of my experiences of strip bars from years ago, and added that I'd be happy to show her.

Later in the visit, we had a free evening, and I asked with a wink if she wanted to see a show? She did, and we set out to give her an education. As we drove there, she pumped me for what I knew and what I thought we could expect.

My experiences were *not* extensive, but I told her that in the U.S., things varied widely according to the local or state regulations. In some places the girls got totally nude. In others, they had to stay in thongs and have pasties over the nipples. Usually one girl would dance on a stage, and the other girls would work the crowd - coming around and doing little private dances for tips.

The tip didn't involve handing the girl money - she would usually indicate how you could give her the dollar. Sometimes you'd be asked to stuff it in her thong, or between her breasts. They would also ask if you wanted a private lap dance, or to go into a back room.

I had never gone into a back room, as that took serious money, but I had had a couple lap dances. You paid $20 and went to a semi-secluded area that had a couch with a metal railing above it. You sat on the couch and kept your hands on the bar behind you. The girl would tease you and dance in front of you for the length of one song. She could touch you, but you couldn't touch her. She could rub her tits on you, or on your face. She could grind her pussy on you, or spread her pussy and show you where god lives.

So we stopped at a club, parked, and nervously walked in (most of the nervousness being on the part of the Sensual Goddess.) My first surprise was no cover charge. We sat at a table and watched as a girl danced on a stage. I went to the bar and ordered two beers, and got my second surprise when the beers were normally-priced. How refreshing - a place that wasn't blatantly fleecing us.

We watched the action for probably half an hour or more. Each girl came out and danced for three songs. The first song was for removing the top or bra. The second song was for removing the panties, and the third songs was for gyrating nude. Yes, thankfully, nude. Going to a place where the girls had to keep a thong and pasties on always struck me as "what's the point?"

The Sensual Goddess asked a passing dancer why that was. The answer floored us. They assumed we were cops!

She assured the dancer that we weren't. And then the evening changed.