How wonderful, to be able to bring myself off whenever I wanted. Before that, I was in an almost-perpetual state of frustration...desperate for a release, but with no idea of how to achieve that release. It sounds silly to say now, but I simply didn't know how. I remember laying in bed at night literally aching, humping the bed, *needing* something to happen. And nothing did. 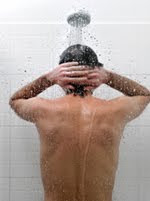 I had to be the cleanest guy around, showering morning, noon, and night. I would decide at the drop of a hat that I really needed a shower. If my parents noticed my changed habits, hopefully they attributed it to a new-found teenage obsession with cleanliness.

But, as with Sadie, feelings of guilt and shame were mixed in with the wonderful feelings of joyful release. I would rather have died a thousand deaths than have anyone know what I was doing in the shower. I was very thankfully spared the misfortune of being taught to be ashamed of my body or sexuality - my parents were relatively enlightened, and we didn't go to a church that taught guilt and shame. But somehow I had the idea that this was something to be ashamed of.

And also, like Sadie, I had the idea that deceased relatives could see what I was doing. The thought wasn't enough to make me stop (wild horses couldn't have done that,) but it was disconcerting.

I also came up with the thought that as long as I had done it fewer than 100 times, that it wasn't really that bad. Of course I got around that by very consciously never doing the math. I was surely over 100 times after six weeks, but I reassured myself for months and months - telling myself that it couldn't possibly be over 100. Then I just stopped thinking about it.

It probaby took more than ten years for the guilt to go away competely, but I had crossed a bridge into a new world.
Posted by Max at 12:21 PM