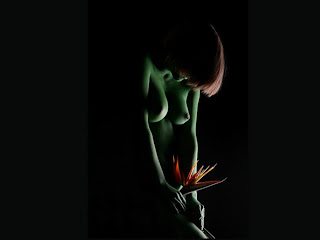 "Commander, I'm asking you a direct question. Did you engage in sexual intercourse with the alien female?"

These fucking admirals. What kind of question is that? Everyone in Starfleet knows that one of the perks of exploratory missions is the "exploratory missions" with the locals. Yes, it was against regulations, but what did they expect?

And in this case...my toes curled thinking of the memories. The planet was a paradise where the locals had no sexual hang-ups or taboos. The mission anthropologist had never seen anything like it. This girl, you could see that the curiosity grew in her until one night she approached me lustily. Once you got past the green skin...well, let's just say that there were delights that no one back on Earth had ever experienced. The first time she showed me what she could do with her three tongues, I just about went out of my mind. We fucked every way I knew of, and some that were brand new.

"Yes, Admiral, I fucked her every which way to Sunday."

I had heard rumors of how they reproduced, but when she was ushered in, all I could do was gape...as the Admiral glared at me.

The challenge this week was exactly 200 words.
The phrase "...[A FEELING] grew in her..." must be used.
Go see Naughty Lexi to see who else is participating!