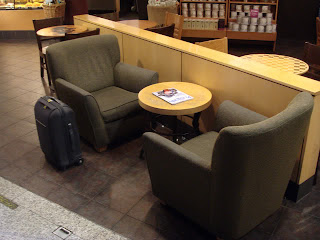 ...and in walked two women, one behind the other. The first was older-middle-aged and looked like a corporate executive. I found it very hard to believe that she was my exhibitionist. Then as they walked to the counter to order, I got a look at the second woman - a dark-haired hottie in a tasteful sun-dress. I sent a flurry of prayers winging toward heaven - "please let it be her."

They both ordered their drinks, and neither glanced toward the back area where I was sitting. I was just going to have to be patient. The suspense was delicious.

Finally, Ms. Corporate Executive got her coffee and made her way back toward me. I was still doubtful it was her, but I was also intrigued - would she really spread her legs and show me what's under that blue pin-striped skirt? But no, as I suspected, she sat in the far corner and opened up the Wall Street Journal.

Ms. Sun-dress was getting her drink, and now we'd find out if she was my exhibitionist. Was she turning toward the door? No, she was reaching for a napkin, and then she started walking back toward me. She gave me no indication, but if it was her, I was a damn lucky guy. I'm not good at estimating ages, but she might have been in her early thirties, maybe 5'5", pleasantly curvy, olive skin, long dark hair. She also kept her big sunglasses on.

Even if she wasn't my exhibitionist, she was a pretty lady, and I enjoyed checking her out. But now we were at the moment of truth - if she was my girl, she would have to sit in the chair opposite me. I looked over my paper to give the room a quick scan. Conditions were perfect. The only other person in the section was Ms. Executive, who was engrossed in her paper, and wasn't at an angle where she could see what was going on. That is, if there was going to be anything going on.

Ms. Sun-dress walked past me...and sat down in the chair. Yes!

I gave her a subtle nod and a smile over my newspaper, but she didn't acknowledge me. She took a sip of her drink and took a magazine out of her handbag. I sat back in my chair and made myself comfortable. I was still pretending to read my paper, but I had an unobstructed view of her in her chair, maybe three feet in front of me.

She sipped her drink and turned a page, and it occured to me that it could still be just a coincidence that she was sitting there. She then removed all doubt.

She scratched her right shin and calf, then lazily moved her hand up to her knee, then slightly higher. This pushed her skirt up her thigh, and she absentmindedly massaged her leg. She brought her knee subtly up, and I was able to see well up her dress, up the insides of her smooth tan thighs. I was incredibly turned on at the show she was giving, and if she had stopped there, I would have been very satisfied.

But she didn't stop there. She paused for a moment, then stretched subtly and opened her legs. I tried to keep my jaw from hitting the ground...but I'm sure I gaped. I could see all the way up her thighs to her crotch, and it looked like she was wearing a white thong. This might have been the most erotic thing I had ever seen, except that it immediately got even better. She held her magazine with one hand on the arm of the chair, and slid her other hand up her thigh. With her middle finger, she stroked slowly up and down her pussy over the thong.

When she slid her hand into the thong, I felt like I might hyperventilate. It looked like she was very slowly circling her clit. Her face was impassive, and I couldn't see her eyes behind the sunglasses.

Then she removed her hand, though she left her legs open. She reached into her handbag and pulled out her phone. I couldn't believe what a cool customer she was, taking a call while flashing me. No...she was sending a text message. Then, unbelievably, my phone beeped. I had a text message...from her.

Is this what you had in mind?

I smiled, then texted her back:

Yes, exactly. You're incredibly sexy. And I want your thong.