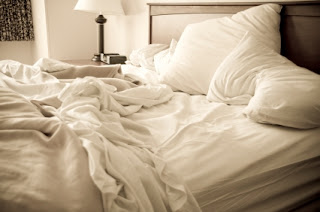 I've read a few blog posts recently on being caught by kids in embarrassing (or potentially embarrassing) situations. We've never been caught in the act. Kids *have* knocked on the bedroom door and come in at potentially bad times, but we always heard the knock and were able to de-couple and act like nothing was happening. But there was one time. We got a question that seemed like it had no good answer.

This happened years ago, and the kids were maybe in the 5-8 year-old range. It was a weekend morning and we were all in my bedroom talking about something. The bed was unmade and the blankets were down. One of the girls noticed stains on the sheets. Big stains. The kind of stains I'm capable of making after being pent up for a few days.

She pointed at the stains, looked at the Sensual Goddess, and asked innocently, "What happened there?"

The Sensual Goddess looked at me with wide deer-in-the-headlights eyes - speechless, panic-stricken, begging for help.

Thoughts whirled through my head at a million miles per hour. What could we possibly say that wouldn't just lead to more questions?

After what seemed like an hour of expectant silence, but was probably really a second or two, I shrugged and said, "It looks like somebody spilled something."

We held our breath. Would it work?

Thankfully, they accepted that without any further questions. I changed the subject, and we both exhaled. A moment later they bounded happily out of the room. The Sensual Goddess gave me a look that was half grateful awe for her rescue, and the other half an accusing raised eyebrow, as if she had just discovered that I was potentially even badder than she had previously thought possible.

"Somebody spilled something, huh?"

I could only laugh. And I still laugh at the memory. It might be the quickest thinking I've ever done. The answer just popped into my head. And in hindsight, it was perfect. It answered the question truthfully without leading to other questions we didn't really want to answer at that time.

It's a line that still gets play, usually with the accusing, "you're so damn bad" shake of the head.
Posted by Max at 10:35 PM