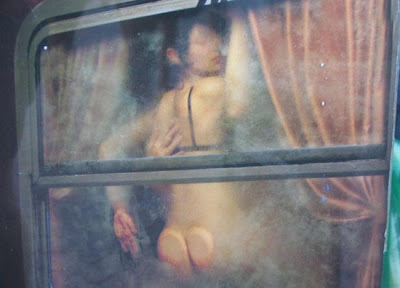 I had been on the Orient Express all the way from Paris, and Istanbul was still hours away. I was taking a little time off after the completion of my last job - both to forget the stress, and to put some distance between myself and the scene of the...operation.

I had a private berth in the sleeper, but I was spending most of my time in the lounge car - reading, smoking, drinking coffee, and watching the landscape roll past. My thoughts now were of the encounter I'd had last night with a young woman.

She sat next to me at dinner and we had a friendly conversation. I got the idea that she was on a modified version of the Grand Tour - seeing the sights before presumably settling down into a marriage arranged by her rich parents. I gave her my opinion on some places she should see, and she was delightfully bubbly. But I was well aware that she was being watched like a hawk by a chaperone - an elderly woman who looked at me with all the disapproval she could muster.

As the meal was ending, she put her hand on my knee, slowly moved it higher on my thigh, and thanked me for my advice. And with a knowing smile, said that maybe we would see more of each other before Istanbul. I smiled politely and excused myself.

I spent the evening in the lounge, giving the matter no more thought. But sometime after midnight, as I made my way down the dim corridor toward my berth, a door opened a crack, a hand touched my arm, and a breathy voice whispered, "Monsieur."

She pulled me into the berth and backed me up against the wall with a strength that surprised me. Her lips sought mine and we kissed urgently. My hands felt the thin lace of a nightgown as she pushed the coat off my shoulders and ripped the shirt out of my pants.

There was a sharp rap from behind us, from what must have been an adjoining door. "Mademoiselle!"

Apparently the chaperone never slept. I whispered, "I'm in sleeper 3B. Be there in an hour."

The impatient little vixen tapped on my door in 40 minutes, but I was ready. I took her hard and urgently the first time, exactly as she wanted. Then we slowed down and I explored her body thoroughly, showing her things that her schoolboy lovers obviously never had. Fully recovered, I then took her my way - a little slower, but just as intensely, and she was begging for mercy as I emptied myself inside her for the second time.

We must have dozed, because daylight was streaming in the window when we awoke. She jumped up in a panic and started scrambling for her clothes. Then she looked back and saw me watching her, erect and ready, a predator's look in my eye. She gave me an unspoken invitation, and I was on her in a flash. I pinned her against the wall of the berth, right up against the window, entering her in one savage thrust. Her scream must have awakened half the train, but I didn't care.

Now, hours later, with breakfast finished, I relaxed in the smoking car with another coffee. I listened to the rumors - apparently a young heiress had escaped the watch of her chaperone in the night. They had cut short their trip, de-training in Bucharest in the early morning.

I listened without expression and motioned to the porter for a refill on my coffee.
Today's Free Fiction Friday is brought to us by Lexi.  Her challenge is to write not less than 500 words on the picture above.  Many thanks to Lexi for filling in this Friday.  Hopefully Flash Fiction Friday will return next week.
Posted by Max at 10:01 PM